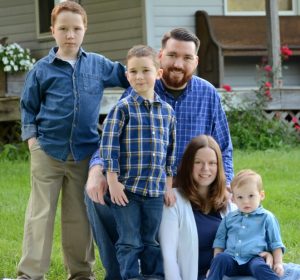 Our Doctrine
Our Church
Our Video
Our Packet
We are the LaRue family, local church-sent, church-planting missionaries in Southern Chile.
We’re laboring in the northern Patagonia region of Southern Chile (where Patagonia begins), working with local national churches and establishing new local churches as the LORD allows throughout the region. Chile is only 70% Roman Catholic, and many of those that claim to be Catholic are so only by tradition. Yet the large (for Latin America) percentage of “Christians” are Evangelicals, following a mish-mash of unbiblical and heretical teachings originating from a charismatic split off of the Methodist church in the early 1900s. Far from being “evangelical” in the theological sense, they teach works for salvation, don’t believe in eternal security, and most of them believe in “sign gifts” for today. The Chilean culture is so steeped in this hodge-podge of spiritual wickedness, which is called “Christian” and marketed with the Bible as a façade, that our job finding those who sincerely want the truth is made difficult. We’re continuing on nonetheless; there’s nowhere to go but forward.
My name is Vince LaRue, and my wife is Kathie. We have three sons: Nathan, James, and Asa. We are church-planting missionaries to Southern Chile, and it is our desire to preach the gospel to every creature, via printed material, door-to-door evangelism, and continual public preaching in every plaza and park throughout the cities and towns of our region. The LORD allowed me to visit Chile in 2005, when I was 17 years old. At the time it was a simple missions trip; an opportunity to use my two years of high school Spanish and experience Latin American culture, as well as visit a Bible-believing missionary and hopefully encourage him and his family. However, the LORD had much more planned. By the end of the trip, I knew that the LORD was calling me to Chile, and the rest of my teenage years and early adulthood were spent with that singular goal in mind. We finally arrived in Chile as a family of four on the 25th of December, 2015, after slightly less than three years of deputation (part- and full-time combined). Our goals have been to get up to speed on the language and culture, and to establish residency here. Also, and even more importantly, we’re working under a veteran missionary (in Chile since 2004) and alongside established national churches, while I study in a Spanish-language, Seminary-level Bible Institute. This time has been invaluable in learning not just Spanish, but “Chilenses” (the infinite idioms used by Chileans), and most importantly, the Spanish Bible.
We are planning a quick furlough for September 2019 through May 2020. Because we came both with a low support goal and under-supported, though exactly when the LORD directed us to come, it is necessary for us to take a short trip back to the States, to report to our current supporting churches and to seek more support for the next phase of our ministry. If you’d like to have us in for a meeting during that time (Sep.2019-May2020), please let us know. We’ll make every possible accommodation to make our schedules work together, because our goal is to blitz the US and get back here as soon as possible, ready to begin the next step in our ministry here in Southern Chile.
Upon our return in 2020, our plan is to begin planting a church in the city of Osorno, Chile, in the Xº (tenth) Región, south of where we’ve been working in Valdivia. There are (currently) no Independent Baptist churches established in this city of well over 160,000. Our hope is that the LORD will show us the people that He has chosen for this work to affect, and that we can begin working His way as soon as we return. Otherwise, we will begin with renting a meeting place (or a house large enough in which to hold services) and start holding services and evangelistic outreaches, in addition to the continual work of distributing tracts and preaching publicly. Since we already know the people, the culture, and since I speak Spanish (and “Chilenses”) fluently, we’ll be ready to begin the work as soon as we arrive. It is our hope that the LORD will see fit to use us in His work immediately, and we are praying even now that He would prepare the ground for our planting of the “incorruptible seed” of the word of God.

We are grateful for every one of the local churches that have determined to partner with us in the LORD's work in southern Chile. It is our desire to be faithful to the LORD in our use of His resources, and we are excited about our upcoming return to the field.

We print our own tracts in country, since we use tracts that have been written by a Chilean pastor, and we can get things printed relatively cheaply. However, it still costs money to print, though not as much as it would to ship tracts here. If you'd like to help with the cost of printing, you can donate to our church or directly via PayPal. Just let us know what your donation is for.

Signup for our Monthly Prayer Letter!